skip to main | skip to sidebar

So some of you know that I've made a few dynamo lights. My latest creation is one with a switch that changes from the 600 Lumen 4x Cree Q5 leds to a female USB out producing 4.96v that charges your cell phone, iPod, GPS.... whatever you need (Yeah... GPS on a bike. Taking touring to the extreme. Turn left here.) It's a solid continuous voltage supply as long as you're going faster than 5mph or whatever. If you slow down below that it shuts off. It's regulated with an LM2940 regulator so you can't fry whatever electronic you put on there.

The schematic. It's a combination of two designs available on the internet. The general dynamo light design is from Pilom. The USB charging is available on the internet if you do some searching. I'm not an EE so I'm not that great at designing this stuff, but I do understand it. The dynamo is a 0.5A current source. It produces AC (alternating current) voltage. A full bridge rectify is use to convert the AC to DC. That's what the four diodes are doing. Diodes only allow current to flow one direction. Since AC is a wave that goes positive to negative, the diodes direct the positive voltage to the positive side of the circuit and the negative voltage to ground on both waves. It effectively takes the normal wave and takes the negative potential of the lower half of the wave and makes it positive. Schottky diodes are used to reduce the voltage drop across the diode. Then C1 cleans up the row of humps so it is a flatter line. This is how flicker is reduced in the LEDs. C2 and C3 are acting as a voltage boost. The resistor just biases the capacitors since they are polarized. Then on the light side it just puts the positive through the LEDs and goes to ground. The reason it must be converted from AC to DC is because of the LEDs. LED stands for light emitting diode. As explained earlier, current can only flow one direction through a diode. If you put a diode in backwards it goes into what is called breakdown and it is no more. Putting a capacitor in backwards makes them explode.
The USB charger side of the circuit is pretty simple. C4 and C5 are just noise filters and the LM2940 is a voltage regulator. It will output approximately 5v. Only one side of the circuits need to be switched. The ground can be shared since there is no potential without a complete circuit. 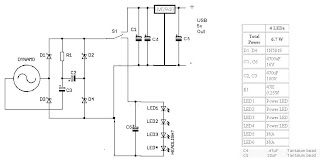 You can see the full bridge rectifier in the center of the board. The metal rectangle is the LM2940. The three big cyclinders are C1, C2, and C3. C4 and C5 and hidden by the LM2940 in this pic. 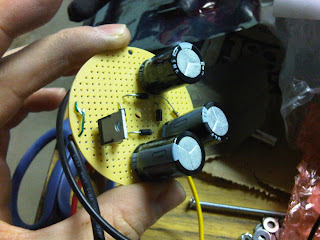 The four LEDs epoxied (using thermal epoxy) to an aluminum disc. My dad cut these out of some scrap aluminum he had laying around. Thanks Daddy. The disc is a heatsink so keep the LEDs alive for longer. They don't produce as much heat in this application because the dynamo limits the current to 500mA. Many battery powered lights use 700mA to 1A. This creates a bit more heat. The bolt is what I call the spine. It holds the LEDs, then spacers go on and the electronics go on there and then the bolt goes into the housing and supports everything. The cap puts pressure on the optics to support the front. 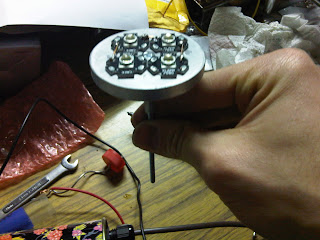 The LEDs. The rectangle is the actually LED with a primary optic. They are put on a 16mm star board to give them a better base. 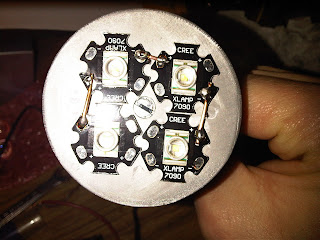 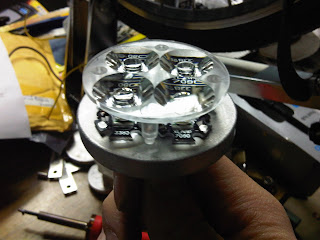 The underside where all the soldering happens. It's pretty messy and not done in a manner that would be considered proper but it works and reduces the amount of wires needed to connect them. If I was going to manufacture these I'd want a pre-printed board so I would just have to solder in the components. Maybe go to the extreme of having a chip made with all the capacitors and diodes integrated into the board. 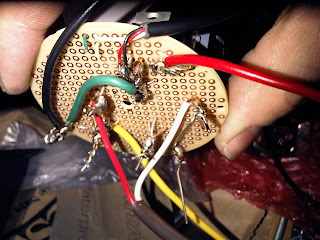 A little better view. You can see C4 and C5 now. They're the little yellow bulbs. It's another style of capacitor usually only used on smaller capacitors. You can see about half of the resistor between the capacitors. 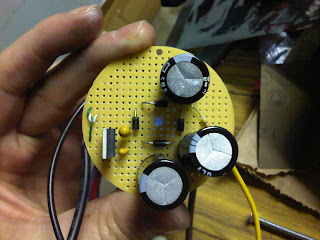 This is the On/On switch. 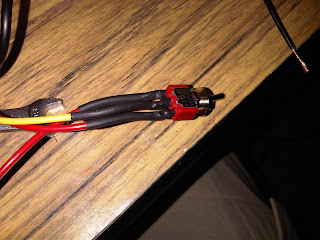 All done. The white nub is a cover over the switch. The black bosses are waterproof bungs for the wires. The brown goes to the dynamo and the black is the female USB plug. The metal piece is the mounting bracket. Everything is siliconed together after everything is tested to make it more water resistant. I wouldn't submerge it but I haven't had any issues in the past year using dynamo lights. It's kinda messy of a method but it works. 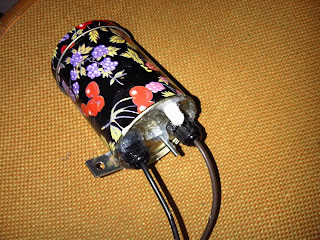 The LEDs with an optical grade lexan lens siliconed into the cap. The cap used to have an S in it for Salt. 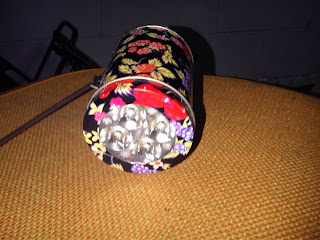 So now you have an idea as to why they're so big. They should be cut down about an inch shorter but it would effect the strength of the housing (the end of the can has a lip that gives it structure) and also make it difficult to push the wires in since the spacer for them would be less. Obviously it can all fit in a much smaller area. My first light is in a small candle holder. The electronics could be remotely mounted in a project box as well with just two wires feeding a small housing with the LEDs. In this case the housing could be about an inch, inch and a half deep with just the aluminum disk, LEDs, and secondary optic.
Posted by DP at 6:06 PM

Goldsprints is an indoor bicycle racing system. Two fixed gears are affixed to rollers via fork mounts. An electronic timing system keeps track of racer progress. The data is shown on a large screen (projected or display) for spectators to watch. Progress is show with a clock face where each racer is represented by a hand of the clock.

Goldsprints is available for setup at private events. Email ecvelo@gmail.com with event details, location, time, etc to determine availability and pricing or just for any questions.

We also would be happy to accept sponsorship for an event. Any prizes you or your company would like to donate will be gladly accepted. We can put your company logo on the background for the main page of the event so it will be on the main screen during breaks.